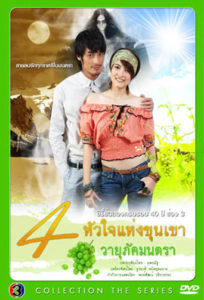 4 Hearts of the Mountains: Season 4

Tichakorn is the Romance novel writer with the pen name “Humming Bird” and she’s also the daughter of the sorcerer. She decides to go to research for her new novel in the vineyard. She has never thought that her fate will be changed when meets Wayupak, a playboy and the owner of Sailom vineyard though it’s the terrible first meeting between them.

Tichakorn has sixth sense and she sees that Wayupak has a female spirit who keeps following him everywhere, so she tries to tell him, but he doesn’t believe her.

In Wayupak’s thought, Tichakorn is a nonsense and meddlesome girl. But he doesn’t know since when she has been in his heart and he can’t let her go.